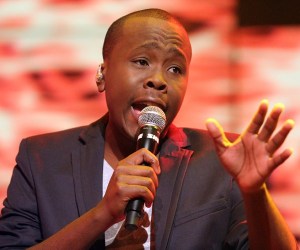 JOHANNESBURG — When Khaya Mthethwa breathed out the last notes of Nicki Minaj’s “Super Bass,” a song he had heard for the first time that same day, the judges of “Idols SA,” the South African version of “American Idol,” were blown away.

“Dude, you’ve just got it,” said Gareth Cliff, one of the celebrity judges, shaking his head.

“This is your competition to lose,” said Unathi Msengana, another judge.

Beyond the usual jitters of a contestant on a reality television program, singing his heart out and hoping for his big break, the weight of pop culture history weighed on Mr. Mthethwa’s shoulders: would he finally become the first black contestant to win “Idols” in his country?

At first glance, it might seem strange in a nation where 80 percent of the population is black that a singing contest decided by a popular vote had failed for years to produce a single black winner. But in South Africa, which for decades separated the races under the brutal apartheid system that put blacks at the bottom and whites on top, nothing, not even a singing competition, escapes examination under a powerful racial lens.

And so last week, when Mr. Mthethwa (whose name is pronounced KYE-ya m-TET-wa) was crowned winner of the eighth season of “Idols,” a fit of soul-searching ensued about just how far the rainbow nation has come in burying its racial divisions.

“It’s about time a black person was recognized,” said Portia Moloi, a 23-year-old sales clerk in a retail shop at the upscale Rosebank shopping mall. “Why did it take so long?”

“Idols,” in all its iterations across the globe, is meant to represent the democratization of musical taste. In its purest form, winners are chosen by a popular vote conducted largely via text messages. Contestants perform contemporary pop hits, classics and old standards before a panel of expert judges from the music business. Ultimately, it is up to the viewers to decide who wins.

But as with so many other aspects of this theoretically egalitarian country, the competition was long swayed by the nation’s Achilles’ heel: the deep imbalances in wealth that have made this one of the most unequal societies in the world.

South Africa’s version of Idols began appearing on M-Net, a private satellite channel available only to subscribers to DStv, in 2002. Back then, the subscriber base was largely white, said Yolisa Phahle, an executive at M-Net, because black people could less easily afford the subscription fees. Votes are cast largely via SMS, which costs money.

Questions about race have dogged the popular program from the start. South Africa has no shortage of black musical talent, producing legend after legend. From international superstars like Miriam Makeba and Hugh Masakela to Ladysmith Black Mambazo, which shot to fame when it recorded with Paul Simon on his smash album “Graceland,” for most international listeners South African music is black music.

Yet for seven seasons the top spot eluded black contestants. The first season a young, blond Afrikaans rock singer named Heinz Winckler won, singing “Drops of Jupiter,” by the American band Train. A white adult contemporary singer named Anke Pietrangeli won the second season by crooning hits by Madonna, Aerosmith and Faith Hill. In the third season Karin Kortje, a soul singer who in South Africa is considered colored, or mixed race, took the title, belting out Aretha Franklin and Whitney Houston numbers. Talented black contestants would make it to the finals only to be outvoted by a white or colored contestant.

At the end of season 6, when a white rock musician named Elvis Blue beat black soul singer Lloyd Cele by almost twice as many votes, a former judge in the competition, Mara Louw, lashed out.

“Lloyd should have won,” she was quoted as saying in an interview with City Press, a Sunday newspaper. “Blacks do not have access to DStv. This excludes a sizable chunk of South Africans from the competition. Whites vote for whites and blacks are disadvantaged,” Ms. Louw was quoted as saying. “I am sick and tired of being politically correct. The whites refuse to vote for blacks.”

Eusebius McKaiser, a political analyst whose new book, “A Bantu in My Bathroom,” tackles South Africa’s lingering racial tensions, said he had no doubt that if “Idols” were shown on the national broadcaster, whose channels are free, a black winner would have emerged much earlier. “We would be talking about when Idols would have its first white winner,” said Mr. McKaiser, who is also a rabid fan of the show, posting exuberantly on Twitter for #TeamKhaya.

But South Africa is changing. M-Net’s audience was once largely white, Ms. Phahle said, but now it more closely reflects the demographic balance of the country. Broad poverty is still a major societal problem — and increasingly a political one as well — but there are also more black people able to afford luxuries like satellite TV.

Mr. Mthethwa, the son of preachers from Durban who grew up singing gospel music in church, said that he was proud to be the first black winner but that race did not define him.

“It saddens me that so many years after our democracy we still have to racialize things,” Mr. Mthetwa said.

But beyond economics, black fans might have other reasons for tuning out “Idols,” said Victor Dlamini, a writer and photographer. With its emphasis on mainstream Western pop, he said, it bypasses the most popular and stylistically interesting music in South Africa.

Many potential black viewers, especially young ones, have little interest in covers of Celine Dion ballads and American soft rock anthems (even Mr. Mthethwa’s homage to Ms. Minaj transformed her hyperkinetic pop song into an R.&B.-by-way-of-Broadway ballad). For them, the bubbling rhythms of kwaito, the thumping dance beats of house music and the soulful songs of Afro Pop are much more appealing.

“Every time I hear these people singing another Mariah Carey song I get tired,” Mr. Dlamini said. “It is really a cultural catastrophe that we are not leveraging the stuff we are very good at.”

At the Maponya Mall in Soweto, the consumption temple of the black middle class, many shoppers were happy that a black artist had finally won the competition.

“I was very excited,” said Mpho Dubazana, a 29-year-old manager at a clothing shop. “I even updated my Facebook status,” she exclaimed, waving her touch-screen smartphone.

But others shrugged it off, unimpressed.

“It is not our music,” sniffed Phindile Maseko, a 35-year-old social worker. “We already have our own R&B and house in our own languages. Why would we sing in English?”

By Lydia Polgreen | published in The New York Times  on October 8, 2012

Mukelwa Hlatshwayo contributed to this report.