Yesterday, my dear friend and mentor alerted me to this article after listening to an interview on National Public Radio. Award-winning Somali journalist and filmmaker Jamal Osman talked with host Q Jian Ghomeshi about the corrupt practices of Somali journalists. Unfortunately, the unethical behaviors seem to be getting some of them killed, according to Jamal. 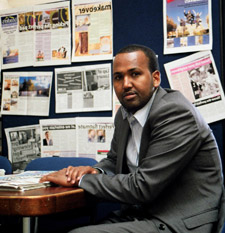 “Corruption is part and parcel of the Somali media. Journalists don’t normally ask themselves if a story is important or interesting. It is about how much money they can get from their sources to publish it…  The sad reality is that such behaviour can be witnessed on a regular basis. Something I often say to fellow Somali journalists is that we were meant to expose corruption; instead, we are the bad guys,” Osman writes.

Osman’s view, outlined in a recent article in The Guardian, contributes to the ongoing dialogue on ethics and integrity in the journalism industry. I find it particulary interesting because in the case of Somalia, it is a matter of life and death. Here is Osman’s article.

Somali journalists are dying from corruption as much as conflict

Somalia is one of the deadliest places to be a journalist. Yet many are endangering themselves through bad practice

It’s been a terrible year for Somali journalists. Fifteen of them have been murdered in 2012 so far – mostly victims of targeted killings. That makes Somalia one of the deadliest places to be a journalist. In all of these cases, the perpetrators have never been caught.

As a Somali journalist, the issue is close to my heart and I would like to shed light on it. In my view, journalists in Somalia fall victim to three circumstances.

First, the country has been in a state of war for more than two decades and some are unfortunately caught in the crossfire: they happened to be in the wrong place at the wrong time.

Second, those journalists working for government-run or pro-government media are seen as “soldiers” by opposition groups such as al-Shabaab, the Islamist group linked to al-Qaida. Although al-Shabaab don’t always claim responsibility for such attacks, it’s not difficult to know which killings they carry out.

Third, the majority of journalists killed in Somalia are murdered as the result of a grudge.

Somali journalists carry the slain body of their colleague, Abdisalan Sheikh Hasan, during his funeral in southern Mogadishu, Somalia, December 19, 2011.

While the murder of a journalist is always a heinous crime, corruption and clan loyalty can take Somali journalists on the wrong path. I’m not in any way suggesting they deserved to be killed, but abuse within the profession has led to the deaths of many.

Bad practice in journalism is not exclusive to Somalia. I live in Britain and the political and journalistic world is still licking its wounds from a huge scandal on phone hacking that has led to a prolonged official inquiry.

The difference in Somalia is that bad practice can lead to a journalist’s death.

Corruption is part and parcel of the Somali media. Journalists don’t normally ask themselves if a story is important or interesting. It is about how much money they can get from their sources to publish it. It’s known locally as sharuur, and it’s a form of bribery.

The sad reality is that such behaviour can be witnessed on a regular basis. Something I often say to fellow Somali journalists is that we were meant to expose corruption; instead, we are the bad guys.

It’s common to see Somali journalists getting paid at press conferences. Once the talk is finished, they queue up to collect their cash. And you can even hear the press conference organisers instructing them how to present the story.

I am starting to be able to spot the sharuur influence on a news item just by noticing the words that have been used. I can even recognise if the reporter was happy with the amount of money that she or he was paid.

For those working with well-established Somali media outlets, the sharuur is higher. It can be up to £1,000 for a news piece. But there’s also a large group of journalists known as beesha caalamka, meaning “international community” – those who call themselves journalists just because they own a small video camera, an audio recorder or even a notebook. Just by looking like journalists they can get their sharuur for attending a press conference, though it’s much less than others are paid.

The phenomenon is getting worse. In the past, media owners would trust their journalists to find stories that could provide a good sharuur and then give them a share of the fee. Now they are appointing sharuur managers to be in complete control of the financial flow.

In the rest of the world media outlets tend to finance themselves through sales of newspapers and/or advertisements. In Somalia it’s through corruption.

If a politician wants to be interviewed, he or she will just negotiate the sharuur and journalists will publish what the sources demand. Sometimes political rivals take revenge through the media: when you become the mouthpiece for someone’s enemy, you become a target. And in Somalia it’s easier to kill someone than to complain.

On one trip to Mogadishu, I remember visiting the port to film general views of it. As soon as I arrived, a policeman at the port’s authority came to me and asked aggressively: “Are you one of their friends?”

I had no idea what he meant. Once I told him who I was and what I was doing, he explained to me that a group of so-called journalists had stormed into his office claiming they were having a bad day and wanted him to pay them sharuur – threatening that if he failed to pay they would write a negative article about him.

Later, I was told that when there’s no sharuur in town, some of the inexperienced journalists go around intimidating local officials and businessmen to extort money.

Locals in Mogadishu describe two types of militia: those with guns and those with cameras. Corrupt journalists expose themselves to serious potential consequences.

Clan loyalty, which is incredibly strong among Somalis, is another huge problem for journalism. Supporting a warlord/politician who belongs to your clan is prevalent – and when you side with your fellow clansmen, you eliminate impartiality. Rival clans will look at you as a clan member, not as a journalist, and thus view you as a target.

As a Somali journalist, I’m ashamed to be associated with the profession, especially when operating in the country. Somali journalists fail to recognise their basic responsibilities to the public. As a result of sharuur, important stories are ignored and Somalis are deprived from their right to impartial information.

The profession needs to be cleaned up. The media owners should do it to save the lives of their employees.

I feel as if we are watching a group of people committing suicide one by one. If a Somali journalist is killed today we just say, “Oh, sad, another one killed”, then another one …

I strongly believe that if more Somali journalists respected their profession there would be fewer targeted killings. We would also do a better job in serving our people. And that would be a win-win situation for all of us.