While thousands are decrying the reported abuse of Ethiopian migrants in Saudi Arabia, one woman hopes to stir more activism in Africa 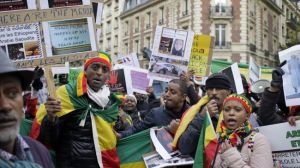 Ethiopians in Paris protest against the conditions of Ethiopia’s undocumented migrants in Saudi Arabia on November 21, 2013.

“I couldn’t sleep. If you see the pictures… ” Meseret’s voice cracks before it trails off, before she lets out an exasperated sigh and swipes away the loose strands of hair around her face.

“As I am talking to you. They are suffering. Imagine, a woman getting raped by 20 men.”

At that point tears flow down her cheeks. She wipes a few of them away. More fall down.

Against the heaviness of her sorrow, her voice rises in an attempt to regain composure. “The human rights community is sleeping on this,” she says.

Over the last several weeks, Meseret Assefa, an Ethiopian expat living in Nigeria, has spent countless moments watching shaky, amateur footage posted on YouTube and Facebook walls of Ethiopians, assumingly in Saudi Arabia, lying in blood, being yelled at by police forces, confessing incidents of rape at the hands of Saudis.

An ongoing clamp down on undocumented Ethiopian migrant workers in the Kingdom of Saudi Arabia rendered thousands vulnerable as many were not able to renew work permits before the November 4th deadline signifying the expiration of an amnesty that was announced in April. The government’s bid to reduce unemployment among native Saudis has left migrants scurrying to legitimatize, or disguise, their presence. Back in November, Ethiopia’s government said 23,000 Ethiopians were in the repatriation process, having submitted to Saudi authorities.The latest stats from December 5th reveal more than 100,000 have since been deported, according to Ethiopia’s foreign ministerDr.Tedros Adhanom. The ones who leave tell wretched tales of suffering and humiliation, like a 22-year-old who told a Bloomberg reporter that he saw six Ethiopians stabbed to death when trying to fight back Saudi youth.

Other nationals are fleeing, too. The BBC reported nearly a million Bangladeshis, Indians, Filipinos, Nepalis, Pakistanis and Yemenis are estimated to have left the country in the past three months.

Many of the Ethiopians who are still there — now less than a million, according to sources— are in hiding.

With the largest free market economy in the Middle East as the world’s largest crude oil exporter, Saudi Arabia has attracted thousands of Ethiopians searching for decent work and a better quality of life. (Read this glowing account by an American expat.)

Africa’s second most populous nation after Nigeria, Ethiopia has the second largest percentage of people living in poverty, according to the Multidimensional Poverty Index.

Bloomberg reports the average college graduate in Ethiopia makes about $90 a month, whereas a maid can make about $200 in Saudi Arabia. There, they usually take jobs as domestic workers, street cleaners or engage in other forms of manual and service-oriented positions. From Ethiopia’s rural areas, young girls and women have flocked to Riyadh to work as domestic servants.

“These girls don’t know anything. When they arrive to Saudi Arabia, the owner snatches their passport or any travel documents they may have. They don’t know their rights,” Meseret says. A kafala system that grants ownership of migrants to the employer or sponsor (an individual or often, an agency) means the foreign worker does not have the right to live freely. The kafala system, having been condemned by human rights groups, is facing further scrutiny.

Stories of rape, brutal beatings, nonpayment of wages are re-shared on social media. Unverifiable videos like this one where a man lies dead on the ground with a bullet mark and this one of a brutal stabbing reveal a cycle of endemic abuse. Human Rights Watch says Ethiopians are giving accounts of Saudis attacking foreigners, holding machetes and sticks.

Accusations of religious bias and racism are getting louder. Ethiopia is a predominantly and historically Christian state. Arab-versus-African sentiments fuel the flame.

Freelance writer Graham Peebles describes it as “racism and hatred running through the streets.”

“In the last 10 days persecution of Ethiopian migrant workers in Saudi Arabia has escalated. Men and women are forced from their homes by mobs of civilians and dragged through the streets of Riyadh and Jeddah. Distressing videos of Ethiopian men being mercilessly beaten, kicked and punched have circulated the Internet…Women report being raped, many repeatedly, by vigilantes and Saudi police.” — Graham Peebles, reporter

“They don’t have documents. They are slaves. They are at your mercy. You can kill them,” says Meseret.

Adhanom reported the death of three Ethiopian citizens from clashes in Riyadh last month. How many were not reported?

The deaths, the violence, the forced labor, the perceived lack of official reaction have provoked the Ethiopian diaspora to denounce it all and demand attention from the Ethiopian government and international media.

Meseret says, “This thing is going worldwide.” She’s gathering the Ethiopian community in Nigeria’s capital of Abuja, most of whom are highly educated professionals working with international organizations, construction firms or the embassy, to join what is becoming a global outcry.

An online petition has more than 23,000 signatures of concerned individuals from Bergamo, Italy to Berkeley, California to Dubai, UAE and locations in between. The petition is intended for delivery to the director of the UNHCR, Amnesty International USA, United States House of Representatives and U.S. President Barack Obama.

“Recently the number of violence and horrific acts against immigrants in Saudia Arabia especially Ethiopians have been off the chart…The so called police and military of Saudi Arabia has been noted killing or beating immigrants to near death situation.” — Stop the violence against Ethiopians in Saudi Arabia, petition

Strings of protests by Ethiopians living in the United States were staged. In downtown Atlanta, Ethiopians assembled just outside the headquarters of CNN. In Washington, D.C., demonstrations at the Saudi Embassy were also recorded. Another demonstration at the Saudi Embassy in Los Angeles featured people holding up flags and placards, chanting “Shame on Saudi, shame on Saudi,” and “stop, stop, stop, stop, the killing, the killing…”

Footage of rallies in Europe and Canada has garnered thousands of views on YouTube.

An Ethiopian worker argues with a member of the Saudi security forces as he waits with his countrymen to be repatriated in Manfouha, southern Riyadh, Nov. 11, 2013. (photo by REUTERS/Faisal Al Nasser)

But in Africa, protests from Ethiopians living around the continent have not been highlighted, to the dismay of Meseret who believes fear and apathy may be to blame for the lack of activism. She says too many Africans keep quiet instead of demanding justice and denouncing wrongdoing.

“In Africa, it’s like the people believe, ‘we are in Africa. There is nothing we can do,'” she explains. “We have problems as Africans ourselves. That’s how I see it. We don’t stand for our rights.”

Her friend, who helped her establish the first Ethiopian restaurant in Nigeria’s capital city, did not hesitate to agree.

“Africans don’t care about these sort of things,” she says.

And when asked about encouraging more Africans to join the international protests, the friend shrugs her shoulders and says, “There are so many other things to think about. This is the last thing on their [Africans’] minds.”

But it seems among the first thing on Meseret’s mind when she wakes, a powerful motivation for stirring fellow Ethiopians in Nigeria to do something. Meseret already has a reputation among Nigeria’s small Ethiopian community as an organizer, a go-getter. She’s making contact with local and international media, planning a demonstration at the Saudi Embassy in Abuja.

She admits that African governments often suppress democratic activism, her own government, included.

For example, citizens gathered at the Saudi Embassy in Addis Ababa last month were arrested on grounds that the protest was an “illegal demonstration,” and required a permit.

“You cannot blame Africans for being scared to protest when things like this are always happening,” Meseret says. She sits at one of the tables in the corner of Saba Restaurant, watching people eat the tibs and injera bread.

In an ideal world, Assefa would coordinate with other Ethiopian disapora communities in Africa, like the one in Kenya, to find a way to help Ethiopians living in Saudi Arabia.

In that world, Assefa would eventually travel to Addis Ababa and set up a civic democracy type of training for girls and women who wish to work abroad so they may be more aware of their rights. Because in the end, they are more than just poor people looking for work; they are Ethiopians.

“Touch not the Habesha,” she says.

By Chika Oduah | Published in Huffington Post on December 19, 2013