As the world remembers “The Greatest” boxing champion who ever lived, Muhammad Ali, I remember his audacious black pride. With his gloves and his lyrical prowess, he showed the world what black pride looked like and what it could do. This man let the whole world know that he was proud to be black and he made you believe that being black was the thing to be (if I can borrow a line from Tupac Shakur).

The grandson of former slaves, Muhammad Ali sought out to understand his blackness. He explored it, defined it and re-shaped it as he grew older and wiser. (He says his sister told him that their paternal grandmother was a native of Madagascar.) 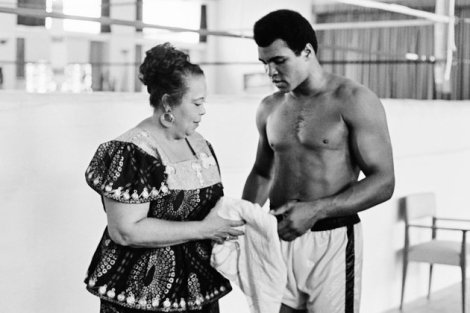 In this photo taken on October 27, 1974 US boxing heavyweight champion Muhammad Ali (born Cassius Clay) stands with her mother Odetta Lee Clay during a training session three days before the heavy weight world championship in Kinshasa. On October 30, 1974 Muhammad Ali knocked out George Foreman in a clash of titans known as the “Rumble in the Jungle”, watched by 60 000 people in the stadium in Kinshasa and millions elsewhere. AFP/Getty Images

His visits to Africa helped solidify his sense of black pride. He visited Africa for the first time in 1964, the same year he converted to Islam and took on the name Muhammad Ali.

His tour started with a three-week stay in Ghana where he said, “We are glad to be back home to see things for ourselves, meet pretty Ghanaian girls, take pictures, and tell our people that there are more things to be seen in Africa than lions and elephants.”

From Ghana he went to Nigeria

A swarm of Nigerian boys run after Muhammad Ali. Lagos, 1964

…then Egypt. He went back to Nigeria in 1971 where he met the military head of state, Yakubu Gowon. Here’s some footage of that meeting.

Of course, it was his 1974 visit that catapulted him into the stratosphere of a mythological legend. That’s when he faced George Foreman in a 4am match in Kinshasa, Zaire where more than 60,000 people surrounded the ring shouting, Ali Bomaye (Ali, kill him in Lingala language).

He visited Egypt again in 1986, Sudan in 1988 and went to South Africa after the freedom fighter Nelson Mandela was released. Mandela, also a former boxer, and Ali inspired each other. Mandela said that when he was imprisoned on Robben Island for 27 years, Muhammad Ali made him feel like the walls were not there.

Ali went to Cote D’ivoire in 1997 to offer relief and food to refugees from the country’s civil war. 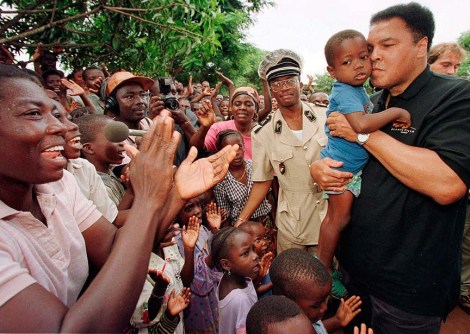 Here are some quotes I like from Muhammad Ali:

“We don’t hate you. We don’t hate those of you that are white. We just want to stay black. We love my color. I just love myself.”

“I want to see Africa and meet my brothers and sisters.”

“I am glad to tell our people that there are more things to be seen in Africa than lions and elephants. They never told us about your beautiful, magnificent hotels, beautiful houses, beaches, great hospitals, schools, and universities.”

“You should have seen them pour out of the hills, the villages of Africa, and they all knew me. Everybody knows me in the whole world.”

“…Africa is the home of original man, the black man, and that Africa, where the slaves was stolen from, has all kinds of rich history.”

“Until I came to Ghana, I never realized that I was so popular and loved by Africans, my people.”

“Boxing was nothing. It wasn’t important at all. Boxing was just meant as a way to introduce me to the world.”

1964 interview of Muhammad Ali with author of The Roots, Alex Haley, for Playboy Magazine

US President Barack Obama talks about how Muhammad Ali inspired him

A Nigerian journalist remembers his interview with Muhammad Ali in Lagos, Nigeria

Watch Muhammad Ali Explain Why He Feels More Free In Africa Than The U.S.

One response to “The Audacious Blackness of Muhammad Ali”