Falmata Gana, widowed after members of the Islamist sect Boko Haram killed her husband in 2012, walks out of the small room she shares with 11 children. Maiduguri, northeastern Nigeria. Photo by Chika Oduah. December 17, 2014

Despite efforts by women’s groups, thousands of Nigerian widows struggle to survive because of Boko Haram’s insurgency.

Maiduguri, Nigeria – For four months and 10 days, Falmata Gana never left her home. She kept her face devoid of makeup and stopped bathing with scented soaps. Her perfumed oils were tucked away, and she did not buy any new clothes.

Her traditional Islamic mourning period of takaba – as it is known in the Hausa language predominantly spoken in northern Nigeria – ended years ago, but Gana is still suffering the loss of her husband.

In 2012, Boko Haram fighters ambushed and shot him dead as he drove home from work one evening. He was a civil servant.

“I did not see him die,” Gana says in a graven voice. She pulls a dark blue hijab forward, covering more of her face. “I heard the story from eyewitnesses.”

A polygamous home, her husband’s first wife left the house a day after his death. She never returned. Gana was left with the first wife’s children – and also her own.

Three years later, the 35-year-old is struggling to pay the $7 monthly rent and school fees for 11 children.

“In our culture, people value married women far better than a single woman, or even a widow. So widows are usually left to fend for themselves.”

As the world mark’s International Women’s Day on Sunday, the plight of widows in northeast Nigeria underscores the struggle many face.

In Maiduguri – the birthplace of Boko Haram and the epicentre of its six-year insurgency – streets teem with widows such as Gana. 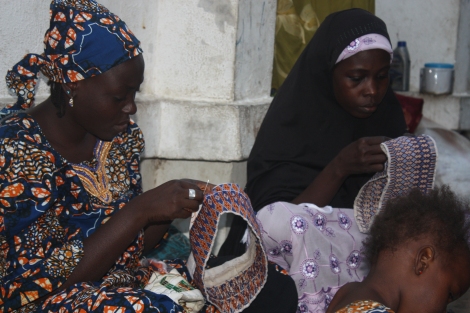 Nigerian women whose husbands were killed by members of the Islamist sect Boko Haram, band together, sewing hats to earn some cash in Maiduguri in northeastern Nigeria. Photo by Chika Oduah. December 16, 2014.

Some shuffle along the thoroughfares selling fried bean cakes. Others meander between cars in traffic performing a beggar’s plea to drivers. Except for the occasional motorist who lets down their window and hands over some cash, these widows are largely ignored.

In the conservative, predominately Islamic society in northern Nigeria, the importance of a woman is largely attached to her marital status, meaning widows are often left in a precarious socioeconomic position.

“In our culture, people value married women far better than a single woman, or even a widow. So widows are usually left to fend for themselves,” says Rabi Ismail, vice president of the National Council of Women Societies in Maiduguri.

“We have seen so many women roaming the streets with their children, and when you ask them, they say, ‘No husband’.”

Gana tries to sell food from her home – bags of wheat, packaged noodles, and seasonings. To supplement her monthly income, she sews dresses for $3 each.

A taciturn woman with little formal education, Gana winces in discomfort when asked to talk about her life. Her words turn into sighs, her gaze on the floor, her voice just a whisper.

One by one, the 11 children return from school. They pull back the door – slab of corrugated tin – and enter to see their mother searching for food. She lifts a lid from a pot; it’s empty.

But it won’t be for long.

In a few days, Gana will go to a food distribution centre to collect items provided by the International Committee of the Red Cross. As a newly registered member of the Muslim Widows Association, Gana is entitled to receive a monthly supply of staple foods from the ICRC that includes 12kg of rice, 12kg of millet, 12kg of maize, and 5kg of beans.

“Life has improved since I’ve joined,” Gana says with a shy smile.

The local chapter of the Muslim Widows Association began collaborating with the ICRC in January 2014 to assist widows who have nowhere else to turn for financial support. The women may qualify to receive start-up cash to buy materials for a business.

Gana says she hopes to use the money to buy more food to sell.

Wasaram Muhammed says she wants to use the capital to purchase a sewing machine.

The $2.50 she makes daily selling plates of talia  – a type of noodle dish – goes towards paying her eight children’s fees at a nearby Islamic school.

Her husband was killed a few years ago.

“Nigerian soldiers entered a mosque and grabbed many men, including my husband,” Muhammed says. “They suspected them of being Boko Haram members. They rounded them up and threw them in Giwa barracks. My husband died in the barracks three days later.”

Giwa barracks is the infamous site of a notorious March 2014 raid by Boko Haram fighters who brazenly barraged through the military facility, allowing many detainees to escape. Soldiers and civilian militiamen eventually killed many of the escapees. Witnesses say bloody bodies littered the streets.

Wasaram Muhammed spreads a mat in the room, calling her children to come for a meal. She says Nigerian soldiers grabbed her husband while he was in a mosque, suspecting him of being a member of the Islamist sect, Boko Haram. He was killed while being held in custody in 2012. Photo by Chika Oduah. Maiduguri, northeastern Nigeria. December 17, 2014.

Today, Boko Haram continues to wreak havoc across northeastern Nigeria, and into the neighbouring countries of the Lake Chad River Basin: Chad, Niger and Cameroon. A mounting humanitarian crisis has seen more than one million displaced in the violent crusade to establish an Islamic caliphate.

Incidents of suspected Boko Haram-linked suicide bombings in the past few weeks have flooded the headlines in Nigerian media.

The government says a recently launched military offensive aims to wipe out all Boko Haram encampments before the presidential election, which is rescheduled for March 28. Nigerian President Goodluck Jonathan, facing a tight contest against former military ruler Muhammadu Buhari for re-election, recently admitted to an influential Nigerian newspaper that he underestimated Boko Haram’s capacity.

Heavy on the campaign trail in January, Jonathan made a surprise visit to Maiduguri, offering reassuring words to displaced people. The condolences came too late for many who have lost just about everything. The fighters have razed entire communities. A few days ago, Boko Haram members ignited the village of Njaba. Dozens were selectively slaughtered before much of the community went up in flames.

“If these widows eventually go back to their villages once Boko Haram is forced out by the military, they will go back to their land and see nothing at all; no house, destroyed farms, nothing on ground. Where will their children sleep?” Ismail asks.

More than 5,000 widows are now registered with the National Council of Women Societies in Maiduguri.

The husbands of the 5,418 registered widows were killed after Boko Haram launched its war against the government in 2009. They perished at the hands of Boko Haram fighters, Nigerian security forces, or civilian militiamen.

The number of widows could be higher. The council has yet to reach some internally displaced persons’ camps where many have flocked from across the state and beyond.

Bintu Tijjani fled to Maiduguri last year when Boko Haram militants seized the town of Bama. According to Nigerian defence officials, Bama is now the site of increased air strikes.

Tijjani lives at the WTC camp with her six children. A few months ago, Boko Haram fighters entered her home. Tijjani fled into the bush with her husband, a fisherman, and their children. A few hours later, her husband went back to the house, assuming the assailants had left. That assumption cost him his life.

Tijjani is still engaged in the takaba, the traditional mourning period.

Many of the estimated 6,000 IDPs at the WTC Camp in Maiduguri are widows from Bama. Most, including Tijjani, are housewives. She does not speak English and barely speaks Hausa. She is among the nearly 80 percent of widows that Ismail meets who are illiterate and unable to economically sustain themselves.

A native of Chibok, in southern Borno state, where almost 300 schoolgirls were abducted last April, Esther Abbashuwa, vice president of the Christian Widows Association, says she encourages widows who are still young to remarry.

Ismail shares the sentiment but says most men would be reluctant to take on the responsibility of providing for a woman with children.

“Honestly, these women do not have a future,” Ismail says. “I know many of them who are just waiting to die. The government may offer to take care of some, but how many can they help? Many will suffer.” 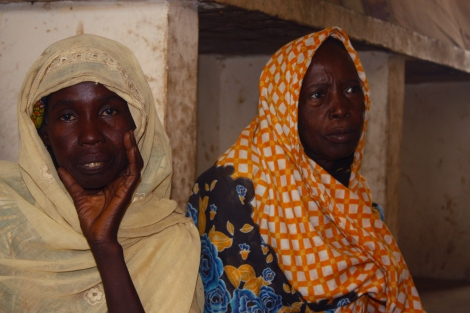 Isa Bukar, 50, fled Bama after Boko Haram insurgents killed her husband in the southern Borno town of Bama. Isa Jibrin, 60, does not know whether her husband is alive. Both women stay in a camp for displaced people in the Borno State capital of Maiduguri in northeastern Nigeria. Photo by Chika Oduah. Maiduguri, Nigeria. December 16, 2014.

In The Land of Nigeria’s Kidnapped Girls