I’m a dance enthusiast. I started taking dance classes as a child. I was about six years old when I took my first ballet class. I moved onto liturgical dance. Then I got into traditional Igbo dance and I’ve since moved on to appreciate other dances from across Africa.

Africa’s diversity is reflected in the dances. The dances in West Africa are quite different from what you’d find in East Africa or North Africa. For example, in a lot of West African dances, bending the waist is a common feature. In Ethiopia, there’s a dance that involves vibrating the neck and shoulders. In the savannah of East Africa, a lot of the traditional dances involve jumping with a straight, stiff back.

Anyway, I’ll start off with just five dances. Some of them have histories that go way back, and others are modern.

It was really difficult narrowing down to just five! (I’ll probably do another list of “hot dances from Africa” later on.)

Assiko comes in at number five. This dance is popular among the Bassa people of southern Cameroon.  And like many dances in West and Central Africa, this is definitely a waist dance. You isolate the waist and use your feet to pedal back and forth. The hands don’t do much. If you get it right, you get this lovely smooth rolling gyration of the hips. Assiko dancers usually wear a simple t-shirt and fabric wrapped around the waist, with a large chunk of the fabric rolled along the hips.

Men and women can do the dance. You can add all sorts of tricks, like fancy footwork, jumps, play with elevation or walk backwards while doing it. But it’s all about the hips. The music that goes with Assiko centers around the guitar (Cameroonian guitarists are freaking brilliant). Check out Jean Bikoko Aladin to hear some excellent assiko music. The word Assiko is a blend of Bassa words- ‘Issi’ for earth and ‘Go’ for foot. It’s pretty groovy and has that lovely quirkiness factor that I always find in Cameroonian dance/music traditions. Assiko is not isolated to Cameroon. It’s spread across West Africa and seems to have kicked off around 1920. 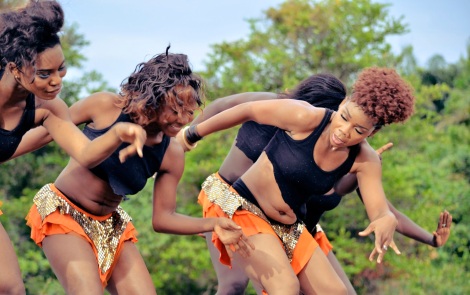 Nigerian dancers do the etighi

This is a modern pop dance from southern Nigeria that gained worldwide fame when Nigerian pop singer, Iyanya, featured it on his video for his 2012 smash hit, Kukere. Big booties and wide hips do very very well with this dance. And again, like many West African dances, this dances highlights the waist and hips. You have to bend over to get the best effect. It involves isolation – like many African dances do. Keep the upper body quiet. The goal of this dance is to make your butt move wildly, while looking stiff at the same time. It’s tricky, but the trick is to actually slightly bend the knees (I learned that from watching older Igbo women do a similar dance) to give the illusion that your butt is moving more than it really is! When this dance originated- I’m not entirely too sure. I started seeing pop music videos featuring it back in 2012. But I wonder if it goes further back. A friend of mine who lives in the southern region of Nigeria told me the dance started when a guy with a bad leg stood up at a party and started dancing. Everyone thought his broken leg dance was cool, and it caught on. Stories, eh? Etighi is a fun, sensual, unisex dance that has really gone international. Kids are quite good at it!

This is a really “technical” version of it! 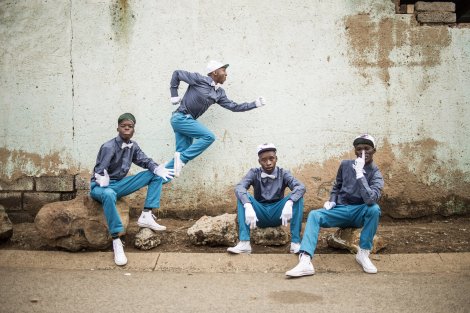 Time to head over to South Africa to check out pantsula. Pantsula is a real smooth dance that actually reminds of the Chicago two- step (You must check out Chicago two stepping, if you don’t know what it is! R. Kelly gave it some props in the video for his song, Step In The Name Of Love).

Pantsula came out of the streets South Africa’s townships during the apartheid era and was used as a rebellious form of cultural and political expression. It used to be a male dominated dance, but nowadays, women and youth do it as well. While a lot of the West African dances feature stiff movements (think of the Ghanian dance azonto), to dance pantsula, you have to loosen up. That way, you’ll get the smooth, gliding effect as your feet shuffle along in quick brushing movements. Pantsula is really hip and trendy. It’s a hybrid dance form that blends elements of tap, jazz dance, breakdance and gumboot. Pantsula is not a posh, elitist dance – like ballet is. It’s a dance that represents the working class, so the pantsula dancer usually wear casual street wear  or an outfit that looks like what a working class laborer (say a street cleaner) would wear.

MIA and Buraka Som Sistema put kudoro on the map when they released the song and video, Sound of Kuduro. Kuduro is a street dance that came out of Luanda, Angola. It’s feisty and fierce and modern. It’s the epitome of Angolan hip hop. The dance is crazy, featuring pop-locks, head spins, flips and twerking. It’s blissful juvenile madness. You gotta love it. And like a lot of modern, street dances across Africa, kids do it the best! There’s something about their flexible, petite bodies man. Kuduro is still shaping and defining itself. It’s fresh, changing with the hot trends in Angola’s pop youth culture. The kudoro rhythm reminds me of what you’d hear in a Caribbean carnival. And I like how women feature prominently in kudoro music and dance.

And now for my favorite dance in Africa….sabar! There are so many reasons to like this dance. It’s beautiful and technical. Sabar is sometimes called African ballet, because it’s acrobatic and graceful at the same time. It’s a skill you have to learn, unlike many other African dances where you can usually just get up and give it a go.

Sabar actually describes a percussion rhythm. The drummers use a stick to hit a drum. Sabar’s roots lie in Senegal and The Gambia. While the other dances on this list emerged within the last 70 years,  sabar goes back a few centuries. It became popular in the United States in the late 1970s when African-Americans really began exploring their African heritage and dancers like Chuck Davis traveled the continent to learn the various dance customs. To do sabar, you’ve got to be learn the movements and you’ve got to be fit! All the jumping and high kicks can leave you breathless. Sabar features extremely fast movements, leg bends, kicks and spins on one leg. Also the hands grab the end of a shirt or dress. It’s such an amazing sight to see women in flowing boubou gowns dance sabar with all the fabric falling up and down. The rhythm of sabar is a cascade of percussion sounds. I just love it. It reminds me of rolling thunder.

I took some sabar classes back at the Alvin Ailey Dance center New York City and I found it quite difficult. I just couldn’t get the hang of it! The rhythm is very different from what I’m used to! But I’ve been practicing and I’m slowly getting better.  In Senegal, sabar started going out of style about two or three decades ago, as youth began looking to American hip hop trends. But in the last decade, sabar has made a huge comeback! People dance it at weddings, in the street and at parties. There’s also a more sensual variation of sabar that’s a wee bit explicit. Sabar is similar to another West African dance called djembe. I actually prefer sabar over djembe, though djembe may be more well-known in the US because it arrived in the United States before sabar did. (Beyonce has put in some djembe moves in some of her dances.) Nowadays, it’s easy to find a sabar class somewhere in London, Paris, New York, Quebec or Atlanta.

This is the more sensual, modern version of sabar

The Music Never Ends In Mali